The Durban Club founding and a short history

The Province of Natal, in South Africa, was so named in December 1497, when it was “discovered” by the Portuguese explorer, Vasco da Gama – who was seeking a trade route to the East. More than three centuries passed when in 1823, and again in May 1824, Durban, on the Bay of Natal (or Port Natal) was first settled by a small group of (mainly British) hunters and traders under the leadership of Henry Francis Fynn, Lt. James Saunders King and Lt. Francis George Farewell.

At a meeting (August 1824) between Fynn and Farewell, and the Zulu King, Shaka, a land grant, some 2500 square miles in extent, was made by Shaka to the settlers of the area around the Bay of Natal, that is to F.G. Farewell & Co., and on 27th August 1824, Farewell hoisted the Union Jack and took possession of the land in the name of the British Crown, who, at that time, was King George IV. The area so granted was “25 miles to the north of the Bay, 25 miles to the south of the Bay, and 50 miles inland”.

By the mid 1850s D’Urban¹ (as it was then called) was a thriving centre of trade on the east coast and the town was proclaimed as a Borough (15th May 1854) by the Lt. Governor, B.C.C. Pine, with an official population of 1,204. Three months later, on 2nd August, eight members were elected to the first town Council, with George Christopher Cato as the first Mayor. The Agreement to form the Durban Club was signed by a group of the Town’s gentlemen on 14th June, 1854, thus making the Club one of South Africa’s oldest Clubs, if not the oldest Club. The Agreement began “ We, the Undersigned, hereby agree to form a Club to be called the D’Urban Club for the purpose of playing at Billiards, Chess and as a Reading and News Room………..”. In fact the Club can trace its origins back a further two years, when, in about June 1852 the Durban Quoits Club was formed, but two years later the gentlemen of that Club desired a less strenuous activity, and they formed the Durban Club, and transferred the assets of the Quoits Club (£4.5.4) over the Treasurer of the newly formed Club.

From very humble beginnings, and two earlier Club buildings, the present (and third) building housing the Club was started in 1900, and completed in 1904, in grand Edwardian style (more specifically Baroque Revival), which was very popular at that time. The building was then described as being “one of the Town’s most exquisite buildings” – an accolade still true today. Indeed, the Club building is a listed building and a famous landmark in the City.

Of course many of Durban’s leading early citizens, including many Mayors of Durban have been members of the Club. Some early members whose names are famously associated with the City, include: Henry Francis Fynn; J.R. Saunders; Richard (Dick) King²; John Dunn; Sir John Robinson; Sir Theopolis Shepstone; J. Ellis Brown and W. H. Acutt. So too are many of the famous families who built huge business empires in Durban, including: Baumann; Campbell; Crookes; Forsdick; Grindrod; Hepburn; Hulett; Marriott; McCarthy; Renaud; Rennie; Saunders and Shave.

There was a time, when the waters of the Bay came almost to the front boundary wall of the Club property; now, through reclamation, a double highway, footwalks and a railway line separate them. Women were first allowed to set foot regularly³ in the Club only in 1904, when members voted (by 61 – 8) to allow ladies into the Club on one evening per month. Of course things have changed a great deal since then and naturally, ladies are welcomed at the Club, including as members.

Some famous men are honoured by the Club through their names. The main dining room is named for Lord Louis Mountbatten, whilst two of the function rooms are named the Churchill Room and the Jan Smuts Room. Within the walls of the Club are some beautiful pieces of furniture, paintings and other memorabilia, historical items and silverware. Once in the Club, the ambience and history will be immediately apparent to any visitor.

In recent times, through the increasing decentralisation of the inner city area, many businesses have moved to the suburbs, and the need for a Club, as large as it was in the period between 1960 and 1990, has diminished. 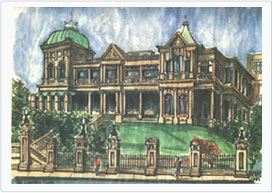 It was agreed in 2002 to sell the Club building to a business called Durban Manor, and the Durban Club leased back, for a period of 99 years, a smaller part of the building more appropriate to members’ needs. This presently forms the Durban Club of today.

1. What is today the City of Durban was formerly the Town of D’Urban named for the then Governor of the Cape Colony, Sir Benjamin D’Urban.

2. It was in May, 1842, when the town had been attacked by the Boers, and besieged in the Fort, that Dick King escaped, and rode on horseback 970km (600 miles) in only ten days, to Grahamstown in the eastern Cape, to summon British re-inforcements, from those garrisoned there. A statue of Dick King on his horse, stands today on Victoria Embankment, about 100m from the front entrance of the Club, being the place from where his heroic and famous ride began.

3. Prior to 1904, ladies were only permitted in the Club on “Special Occasions”.